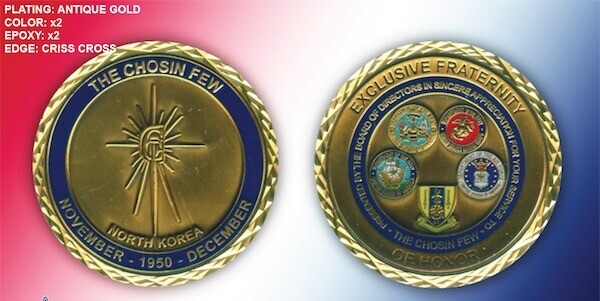 A challenge coin is a small coin or medallion (usually military), bearing an organization’s insignia or emblem and carried by the organization’s members. Traditionally, they are given to prove membership when challenged and to enhance morale. In addition, they are also collected by service members. In practice, challenge coins are normally presented by unit commanders in recognition of special achievement by a member of the unit. They are also exchanged in recognition of visits to an organization.

The origins of the challenge coin dates back to the Second World War and was first used by Office of Strategic Service personnel who were deployed in Nazi held France. The coins were simply a local coin used as a "Bona Fides" during a personal meeting to help verify a person’s identity. There would be specific aspects such as type of coin, date of the coin, etc. that were examined by each party. This helped prevent infiltration into the meeting by a spy who would have to have advance knowledge of the meeting time and place as well as what coin was to be presented, amongst other signals, as bona fides.

In the case of The Chosin Few, challenge coins have been distributed exclusively by members of the Board of Directors to members and others in appreciation of service to the organization. However, in appreciation to all Regular Members and Legacy Members for their loyalty and dedication to The Chosin Few, these coins are being made available to those who wish to own this beautiful coin as a memento or as a gift to a Chosin Reservoir warrior.